Odyssey changed the game with their insert putters in 1991, and continue to push the boundaries even today.

Let’s jump into our Odyssey White Hot RX Putter Review to see what the guys at Odyssey have in store for us this time round.

We reviewed the Odyssey White Hot RX Putter as part of our Best Golf Putters Review.

Odyssey changed the game in the early 90's and they're now a leader in the game in 2017...the White Hot RX range has carefully and effectively changed their insert technology to produce more friction yet softer feel in order to optimize roll and ball speed at impact. 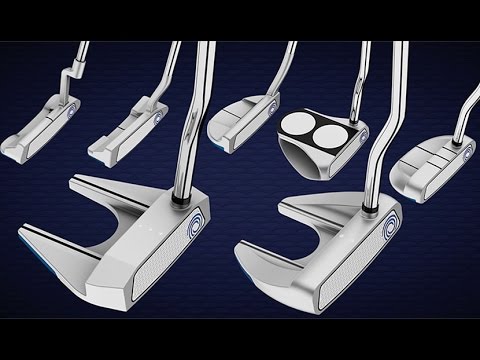 Now if you remember correctly the original Rossie 1 & 2 inserts were black and smooth – Odyssey have since turned that around completely having a White Hot insert with a mesh texture, which is now termed RX.

The #1 is a slightly rounded blade at the heel and toe unlike the Ping Anser 2 that is very square in all aspects. Odyssey have thrown a splash of blue into the mix as well that we aren’t crazy about in terms of the #1 head in all honesty.

On the bigger heads such as the #7 or #9 it is fine, but on the #1 it looks like they were unable to think of anything else to do with it design-wise and just splashed it on last minute to give it a unique look.

Odyssey are ONLY known for their putters. That is because they ONLY manufacture putters and nothing else – as they say in the classics “stick to what you know”! The insert technology that Odyssey have engineered is incredible and most other industry competitors have taken a leaf out of their book in order to keep up.

Tour proven head shapes that set the bar and the oval pattern insert that increases friction at impact.

Odyssey tested 17 different materials to use in the face and ended up selecting elastomer as opposed to their original urethane insert.

As mentioned above the textured insert causes there to be less points of contact with the ball at impact and because of this it feels exceptionally soft – almost as though you’re striking the ball with an aged piece of chewing gum.

Slightly lighter than the Ping Anser 2 at 345g it is still adequately weighted and provides enough feedback and feel at impact.

Now even though the feel at impact is really soft that is primarily due to the materials in the center of the putter head as obviously the face still needs to be ‘firm’ enough to withstand repetitive strikes over time and maintain it’s profile.

You ask any professional what their preferences are in terms of a putter’s performance and they will tell you firstly they want the ball ROLLING off the putter face as quickly as possible.

You’re now thinking, but doesn’t every ball roll off the putter face!?? Answer is no. Every single putter causes the ball to ‘slide’ directly after impact and only then after a few milliseconds after impact does it start rolling end over end – the aim of any putter manufacturer is to try reduce this slide to a bare minimum, which in turn improves accuracy and consistency.

As Jerry Maguire stated “Show me the money!”, the entire White Hot RX range is superb value for money and we’re not just saying this.

Besides our opinion on it being a class leader in feel, speed after impact, sound and consistency this ticks all the boxes and what is even better is that Callaway has a guarantee that within a two year period after purchase if you are not satisfied with your putter they will gladly replace it or repair it if you’ve found (or created!) a defect.

For the record, Odyssey led the putter count at the 2016 Arnold Palmer Invitational, which also makes you think. How many players do you see playing Callaway on the PGA Tour where their contract states they have to use Odyssey? I can assure you there definitely weren’t more than 30 yet there were a whole lot more players out there using it.

Get your hands on one of these quick and if you tend to have the odd ‘hand-jerk’ through impact on the short ones then we suggest you opt for the SuperStroke putter grip as well while you’re there as a custom option at $20.00 extra, well worth it.